SOMETHING WICKED THIS WAY COMES 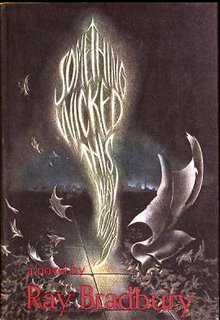 I make no apology for taking a volume by this author off the shelf so soon after writing about another of his books... After all, today is his birthday!

It all began one August day in a long hot summer month of my youth. I opened a book and read:

“First of all, it was October, a rare month for boys…”


I was hooked! Just as I was when I read Charles Dickens' line: “Marley was dead to begin with…” The same cunningly clever opening: something that needs to be understood and explained and the knowledge that it is, first of all, just the beginning…

I didn’t know then that the author of this story I was about to read revered Dickens’ A Christmas Carol as one of his favourite books.

Something Wicked This Way Comes - the title, courtesy of one of the Witches from Shakespeare’s Macbeth - is an irresistible beckoning, bony finger.

It is a dark tale, darkly told, about what happened - or what might have happened, or might yet happen - in the misty, musty, leaf-rustling days of October…

Will Halloway and Jim Nightshade are the best of friends. They are also opposites. One blonde, the other dark-haired, both born on Halloween: Will at one minute to midnight, Jim at one minute after midnight. One is drawn to the light, the other summoned by the dark. 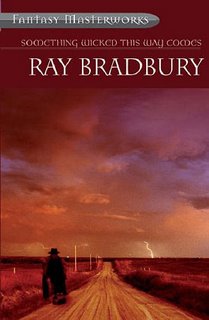 Then, into the sleepy, autumnal atmosphere of their small mid-west American town comes Tom Fury, the seller of lightning rods, with a bag rattling with curiously-wrought ironmongery and muttered warnings of storms to come...

AND COME THEY DO…

In the early hours of a moonless night, a mournful train-whistle heralds the arrival of a carnival that will change the lives of everyone in the town forever.

Cooger and Dark's Pandemonium Shadow Show offers a variety of apparently harmless candyfloss laughs and thrills. But behind the flaps of the great black tent, lurk terrifying freaks; and the seemingly innocuous attractions set up along the midway are anything but what they seem: a Mirror-Maze that reveals ugly reflections of untrue futures; a Ferris Wheel that spins its passengers into oblivion and a Carousel that can ride you backwards to youth or forwards to death...

Will and Jim discover the secret of the dark carnival and its long, torturous history winding its way across the world and down the years. For them alone: the challenge of confronting and overcoming raw evil; it is their destiny, but it is a task that puts their friendship and their very lives at risk…

I treasured that book; became the passionate lover of the story: writing and broadcasting about it whenever I got the opportunity, spreading the gospel that this is a tale that everyone should read once before they forget what it is to have been young...

In 1986, many years after my first reading of Something Wicked, Ray and I met for one of our sporadic meetings - infrequent only because, most of the time, the breadth of the Atlantic divides our lives. Anyway, on this occasion, we had lunch at the Walt Disney Studio where Something Wicked film-sets still stood on the back lot, so Ray signed my copy of the first British hardback edition of the book-that-would-become-the-film with an appropriate location-tag!

Why do those who love this book have feelings towards it that are both proprietorial and evangelical?

Like so much of Ray’s writings, it is partly to do with the way in which the author luxuriates in language: if you come to Bradbury when you are still young and learning the mystery and mastery of words, then you cannot help but apprentice yourself to someone who is not only a craftsman but also (very probably) a magician!

Bradbury books fizz and sizzle on the eye and the ear: the rich, almost baroque, architecture of the narrative; the startling, metaphor-embellished paragraphs; the lavish, adjective-encrusted sentences; the audacious theatricality of vision and the razor-sharp observation with which the characters are given life and costumed for the beautiful and bizarre dramas they are called on to enact…

The man was tall as a lamp post. His pale face, lunar pockmarks denting it, cast light on those who stood below. His vest was the colour of fresh blood. His eyebrows, his hair, his suit were licorice black, and the sun-yellow gem which stared from the tie pin thrust in his cravat was the same unblinking shade and bright crystal as his eyes.

He flourished a white calling card. It turned blue. Whisper. Red. Whisk. A green man dangled from a tree stamped on the card. Flit. Shh.

“Dark. And my friend with the red hair is Mr Cooger. Of Cooger and Dark’s…”

Read my interview with Ray, The Brabury Machine here.

A truly fantastic book, and one that improves with each reading. One year I took it on a beach holiday, and thought it would be impossible to read in blazing daylight, being a thoroughly autumnal tale. But Bradbury engages the sense so thoroughly, that I became lost in the story. I swear crisp autumn leaves blew past as I sat on that Spanish beach...

By sheer coincidence, I've also been re-reading "Something Wicked This Way Comes." It reminds me once again what a rare treasure Ray Bradbury is! I wish him a happy birthday and many, many, many thanks.

Brian, you said it when you said "craftsman". Another descriptive adjective might be "wordsmith." I remember counting the words in one sentence, which book I do not recall, but there fifty words in it. And it flowed, smoothly and with great clarity. I had to stop and re-read the sentence and then was amazed to realize the complexity, yet simplicity of the sentence. And this from a man educated in the stacks of libraries. Long live Ray Bradbury!