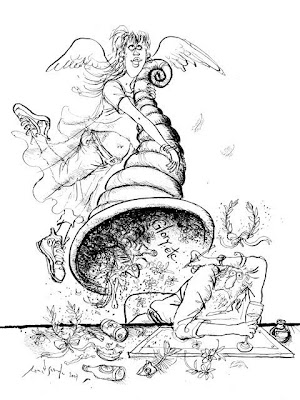 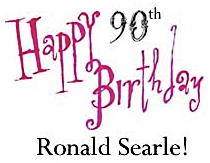 Originally posted on the Sibleyblog on 3 March, 2010, the 90th birthday of the greatest cartoonist of the late 20th century.
Click image to enlarge

RONALD SEARLE is universally remembered for his infamously anarchic educational establishment, St Trinian's, whose young ladies were later immortalised on film under the tutelage of Miss Milicent Fritton (first portrayed by Alastair Sim and, more recently, by Rupert Everett) and who are here seen, in one of the original drawings, turning out to greet an honoured guest on Founder's Day - could it be the artist himself? I think so... 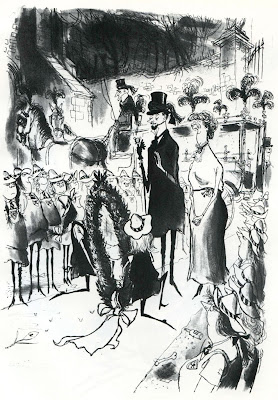 Click image to enlarge
I first encountered Searle not on the hockey-pitch of St Trinian's but through his illustrations to the fairytale worlds of James Thurber's The 13 Clocks and the Wonderful O... 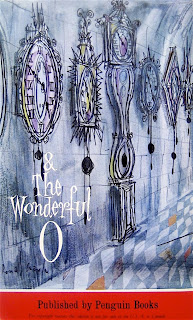 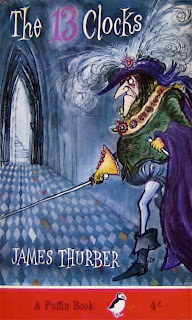 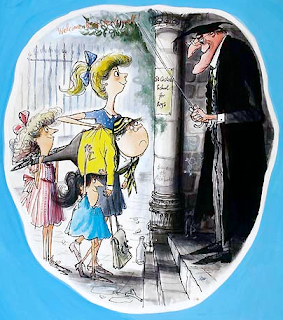 Shortly afterwards, I became acquainted with (right) Searle's graphic contribution to the academic misadventures of Master Nigel Molesworth who - "as any fule kno" - was the Curse of St Custard's.

Despite the fact that Searle's collaborator was a former teacher, Geoffrey Willans, Down with Skool, How to Be Topp and their companion volumes were widely condemned by educationalists in my day (and certainly banned from my skool library) due to their appalling spelling and grammar and, more heinously, their highly subversive content!

Today, changing social mores not withstanding, they remain an hilarious insight into the monstrous minds of small boys!

"The Molesworth-Peason lines Machine.
Runs off a hundred in one minit. (patnt pnding.)"
Click image to enlarge
During my own passage from adolescence to adulthood, I discovered Searle's many collections of cartoons and pen portraits as well as some of his illustrations to an astonishing range of books by authors ranging from Charles Dickens via Christopher Fry to Patrick Campbell. 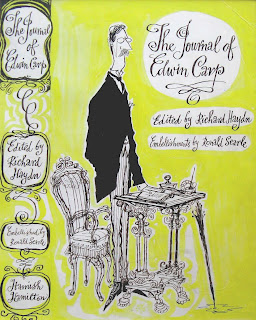 Searle, I found, had also decorated the lyrics of Tom Lehrer, Flanders and Swann and, in the animated film, Dick Deadeye, the stories and characters of Gilbert and Sullivan.

I also stumbled across (left) his spidery 'embellishments' to a delicious oddity, The Journal of Edwin Carp, written by the actor Richard Haydn (fondly recalled as Max Dettweiler in The Sound of Music) which inspired this short animated film...

Ronald Searle was an artist of enormous diversity, whose work spans over sixty years of contributions to Lilliput, Punch, Life, Holiday, La Monde and many other publications containing his idiosyncratic observations on life in Britain... 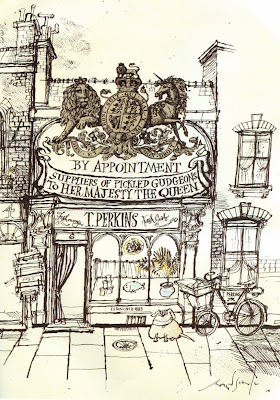 Click image to enlarge
France, where he eventually made his home... 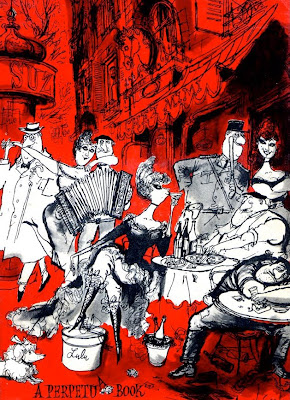 Searle's established brilliance as a caricaturist, led to his designing several memorable movie posters and title sequences for a number of films including Scrooge, Monte Carlo or Bust and Those Magnificent Men in their Flying Machines... 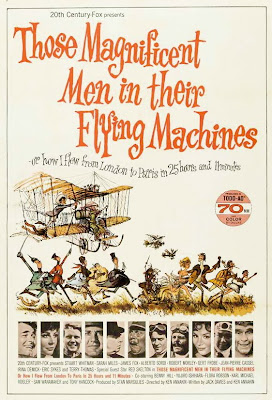 Click image to enlarge
During WWII, Searle had undergone the harrowing experience of being a Japanese POW in Changi Gaol and having witnessed torture and death at such close range may well have contributed, obliquely, to the comic violence found in the corridors, dorms and labs of St Trinian's and St Custard's. They certainly seem to haunt many of his later, darker cartoons, but the humour always bubbles through especially in his much-loved universe of bizarre birds, preposterous pigs and corpulent, contented cats... 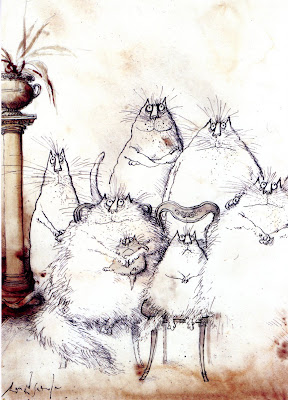 Click image to enlarge
The work of this brilliant artist is currently being celebrated in two major London exhibitions:

This glorious exhibition celebrates the creator of Molesworth and Co and the 'Surly gurls' of St Trinian's with some memorable scholaric moments such as this one... 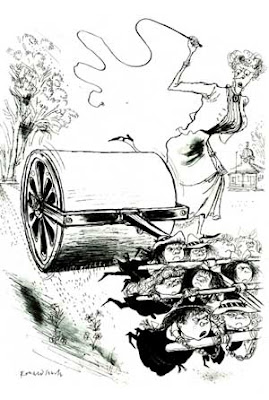 "Ruddy Sports Day!"
The exhibition places Searle's cartoons, caricatures and illustrations within the historical context of graphic art as represented by such predecessors as Gilray, Cruikshank and Rowlandson. It also expands our appreciation of Searle's brilliance as a master of graphic reportage as demonstrated in a wide range of works from scenes of London life (sewer-men, flag-makers, boxers, and auctioneers) made during the 1950s for the News Chronicle and which are an evocative insight into London life in the early days of the 'New Elizabethan Age', through to Searle's globe-trotting observations of other cultures, by turn, brutally harsh and wryly affectionate. 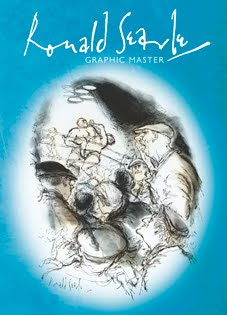 Among the exhibits (many borrowed from the artist and his family and several of them unpublished and seen here for the first time) are plenty of pictures that make you smile, chortle and laugh out loud at the follies and absurdities of human nature, as well as others that will evoke quite different emotions such as Searle's painful and horrific war-time sketches of disease and death in the Burmese jungle and his clinical post-war chronicling of the trial of Adolf Eichmann and an emotional response to the erection of Berlin Wall.

A fabulous, full-colour 160 page catalogue (right) contains - in addition to a superabundance of Searleiness - essays and art-pieces by Steve Bell, Roger Law, Uli Meyer, Arnold Roth, Martin Rowson, Gerald Scarfe, Posy Simmonds and Ralph Steadman. At £14.99 it is a 'snip'.

If you love Ronald Searle - or even if just quite like him - you must not miss this exhibition! Among the exhibits that are on loan (rather than for sale) in the Beetles show - which traces Searle's draughtsmanship from Lilliput to his illustrations, a year or two back, for Jeffrey Archer's Cat O'Nine Tales - is our very own Searle original: a classic St Trinian's cartoon showing the long-suffering headmistress and one of the little devils in her charge... 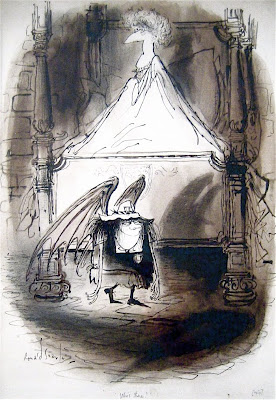 Click image to enlarge
On a blog post of a few years back, you can read more about this picture and about some of Searle's other work. 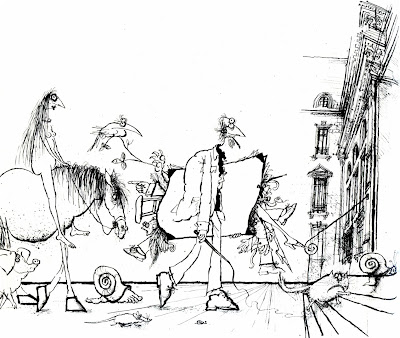 Several of the illustrations in this post have been 'borrowed' from my good friend, artist and animator, Matt Jones' blogs: Perpetua - Ronald Searle Tribute and Ronald Searle Tumblog, which are the places to go to read and see more - a lot more - about the work of this incomparable artist.

And check out Matt's other blogs:
Matt Jones' Sketchbook
Matt's Morgue
Mis-en-scene and others.

Incidentally, Matt will be giving a talk about Searle's work with animation at the Cartoon Museum on Tuesday 30th March. A month later (more or less) on Wednesday 28 April, I will be speaking about Searle's illustrations. There will be a number of other talks during the run of the exhibition and I'll give details as soon as they are available. All talks will begin at 6:30.
at April 11, 2010 No comments: