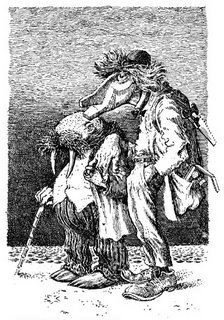 As my BBC radio serialisation, The History of Titus Groan continues to be brought to life in Studio 60a of Broadcasting House, I have been reflecting on the pathways of happenstance that led me to Gormenghast.

It was Lewis Carroll who introduced me to Mervyn Peake: my fascination with the Alice books prompted me to start collecting illustrated editions and one of the earliest ones I stumbled across was illustrated by Peake.

Unlike almost every other artist who had ventured into Wonderland and Looking-glass World, Peake succeeded in throwing off the shackles of John Tenniel and produced pictorial visions for Alice’s adventures that matched the bizarre, often disturbing, text which they accompanied… Who else but Peake would have thought of giving the Carpenter a wood-grained face and, literally, finely chisled features?

Peake’s Alice led me to his illustrated editions of Grimm’s Household Tales and those sea-faring sagas, The Hunting of the Snark, The Ancient Mariner and Treasure Island (below). 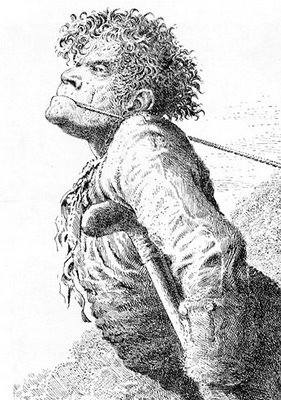 My delight in these drawings prompted me – with the impetuosity of youth – to write to the artist’s widow, Maeve Gilmore; and, to my great delight, I was immediately invited to tea at the then Peake home at 1 Drayton Gardens, Kensington. 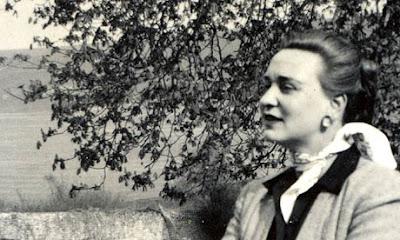 After tea, Maeve took me into Peake’s workroom, pulled open a drawer and allowed me to browse through folder after folder of her husband's original illustrations. 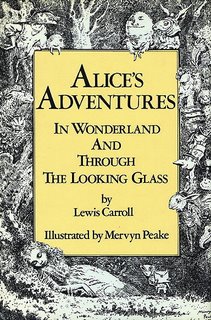 It was while we were looking through the illustrations for Alice that I discovered that several the illustrations, as first published in Stockholm in 1946, differed from those in the 1956 British edition of the book with which I was familiar.

Being at the time, Secretary of the Lewis Carroll Society (and editor of its newsletter, Bandersnatch) this was a fascinating discovery that I was eager to write up. Maeve, sensing my enthusiasm suggested to Peake’s publishers that I be invited to edit what was the first definitive edition (right) of the Carroll-Peake Alice.

This assignment led to more afternoon teas and a deepening friendship with Maeve who – over the Earl Grey – coerced me into joining the Mervyn Peake Society (of which I would eventually become first Secretary and then Chairman) as well as encouraging me to discover Peake the writer as well as the artist.

I went away and read The Rhyme of the Flying Bomb, Shapes and Sounds and Mr Pye and, inevitably, turned my footsteps in the direction of that mournful mountain of masonry – Gormenghast.

Nothing I had ever read prepared me for that world of ruination and ritual; a realm of endless corridors burrowing through a sprawling edifice of broken, ivy-eaten stone; a cloistered universe inhabited by characters hopeless in their complacency, lost in their self-absorption or burning with the fire of ruthless ambition. 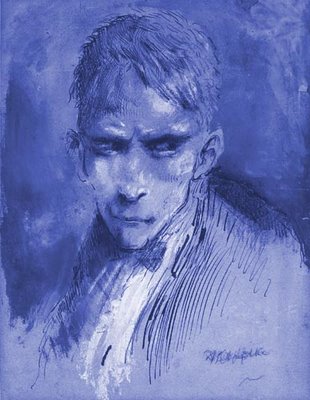 When I became Chairman of the Society of Authors’ Broadcasting Committee and had regularly to attend meetings at their offices at 94 Drayton Gardens, I saw Maeve more frequently: having lunch with her in the basement kitchen that she had entirely decorated (down to the Potterton boiler) with murals or enjoying generously measured gins-and-tonic in the back-parlour - or, as she called it, the 'petite salon'.

It was Maeve who encouraged me to offer the BBC a radio dramatisation of Titus Groan and Gormenghast and whilst she didn’t live to hear the Sony Award-winning production with Sting as Steerpike and a star-studded cast, she listened intently as I read her the scripts in the 'petite salon', and – after refreshing my G&T – offered insights and suggestions and generally guided me through the labyrinthine task.

We often talked about how to get more of Mervyn Peake’s work back into print and looked many times through those folders of drawings and paintings filled with so many dazzling examples of her late husband’s stunning draughtsmanship – such as his then unpublished illustrations to Charles Dickens’ Bleak House with such brilliant pieces as the portrait of the icy and imperious Lady Deadlock, illuminated like a player in a Toulouse Lautrec theatre… 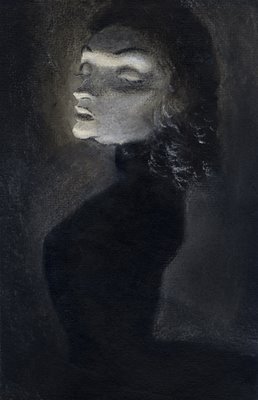 …and the haunting picture of poor, downtrodden Jo the crossing-sweeper with his fear-filled eyes and poverty-pinched features… 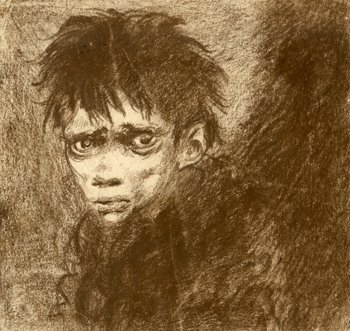 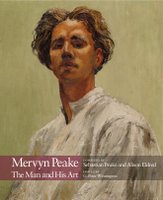 Maeve would have been thrilled that so many of those drawings and illustrations were eventually collected in the book, Mervyn Peake: The Man and His Art, compiled by her eldest son, Sebastian Peake, with Alison Eldred and G Peter Winnington.

Published in 2006 by Peter Owen, this volume (more than any earlier collection) is stashed with examples of Peake’s multi-faceted talent: his daringly eclectic range of styles; his fearsome command of every media from the pencil-box and ink-bottle to the paint palette; and his seemingly inexhaustible capacity for perceptive characterisations that capture the comically absurd, the darkly macabre, and the sensually seductive…

I well remember attending the launch of this book at Chris Beetles Fine Art, London, where a selling exhibition of Peake’s work was also on show.

The price-list, naturally, was not reading matter for the faint-hearted or lily-livered, but, as with all such exhibitions, it costs nothing to look and to marvel at the skills of a unique craftsman whose reputation has now deservedly been rediscovered and is rightfully widely celebrated… 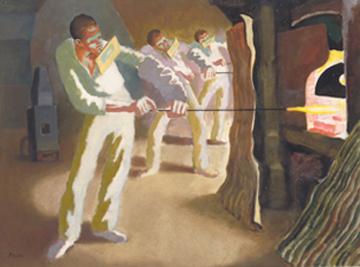 However - as is normal in the world of fine art – it is depressing to contemplate the vagaries of fame: remembering that Peake was an artist who, again and again throughout his life, was strapped for cash but who, if he were but alive today, might have expected a healthy cheque from Mr Beetles at the end of the show…

It also occurred to me at the time – looking around at the champagne-drinking chatterers attending the Private View – that, had he been there, Peake would have had his notebook out and been sketching madly… 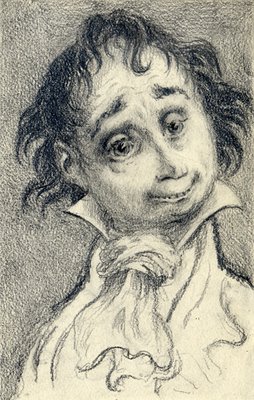 Then I realised that he had already sketched a good few of the attendees and they were there for all to see --- framed and hung!

The room was papered with Peake’s people but it was also thronging with them too, milling around, unwittingly scrutinising their twins and wondering at their beauty, shuddering at their monstrousness, laughing at their ludicrousness… 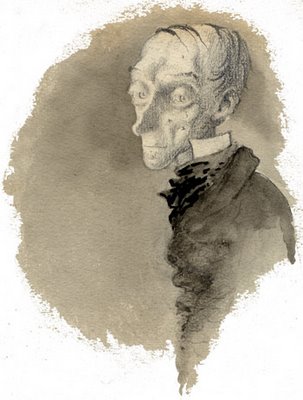 The likenesses in line had their counterpoints everywhere: that man with the lantern jaw; this one with the parrot-beak nose; the tall woman with no chin and gimlet eyes; the dwarf with the beetling brows and tombstone teeth, the walking cadaver with the hooded eyes...

Perhaps, I thought, but then, suddenly I noticed – just beyond Jeffrey Archer – the portrait of Mr Chadband from Bleak House being intently scrutinised by none other than Mr Chadband himself! 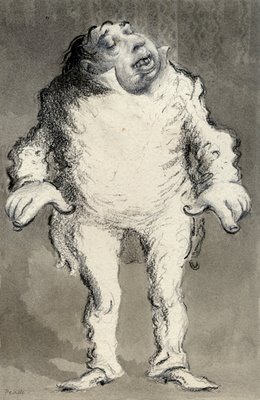 For more information about Mervyn Peake: the man, his art and his writings visit the official Mervyn Peake website. 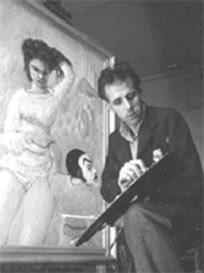 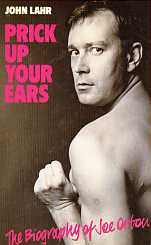 John Lahr writing in his biography of Joe Orton, Prick Up Your Ears, quotes a letter written by Orton's lover, Kenneth Halliwell, that was somewhat facetious in tone, whilst being disingenuously signed, 'Yours humbly'.

Lahr says (and I think it's a great quote):

Humility in laughter is as unwelcome as modesty in a prostitute.

Ceaselessly cheerful, tirelessly plucky and endlessly resourceful Rupert Bear is ninety years old and yet as youthful as ever.

Rupert first appeared in November 1920 in a comic strip created by Mary Tourtel for the Daily Express newspaper as part of its bid to win readers from their rivals the Daily Mail which featured a popular strip about Teddy Tail.

In 1935, when Mary Tourtel retired, the task of drawing Rupert - and writing his adventures - fell to illustrator and Punch artist, Alfred Bestall. 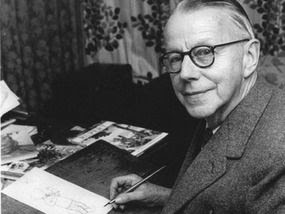 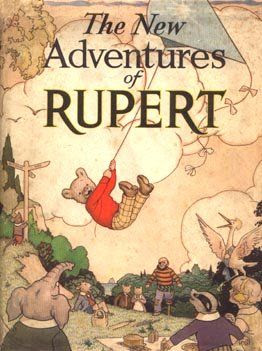 Out of respect to the Rupert’s creator, Bestall - a modest, self-effacing man - didn’t sign his artwork until after Mary Tourtel’s death in 1948.

Alfred Bestall wrote and illustrated a staggering 273 Rupert stories (mostly for the daily newspaper publication but with others produced specially for the annuals) until his own retirement in 1965.

I only ever saw the newspaper strip when I visited my paternal grandparents, but I was given several Rupert annuals over the years, this being the first... 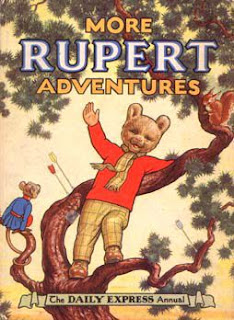 Heaven only knows where it is now!

What I really loved about Rupert was the format of the albums: the running headings that were a synopsis of each story with little figures in the top corner of each page; the four-frame picture-story, the rhyming couplets that told the story under each picture in not-very-sophisticated doggerel and then the prose telling of the tale that appeared at the bottom of the page just as it did under the panels in the newspaper. 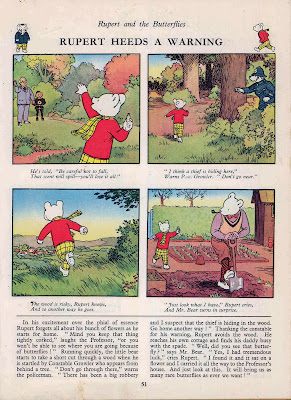 Then there were the activities-pages with puzzles, origami models (which I never successfully made) and, in later numbers, magic painting pages.

And, for me, the highlight of ever annual: Bestall’s wonderful full-colour wrap-around cover plus those enchanting endpapers showing the coutryside around Nutwood and other wonderful landscapes - sometimes seascapes - that combined the real and fanciful into a dreamworld that still haunt the memory…

Then, of course there were the stories - packed with wild escapades, amazing expeditions curious inventions and extraordinary characters that secure these little narratives a place among the most inventive writing for children in the twentieth century.

There were mysteries, too, such as why it was that inside the books Rupert had a white face, hands and boots but on the cover was a brown bear in brown boots!

The one exception (right) was the 1973 annual where someone at the Daily Express impudently altered Alfred Bestall’s artwork for the cover in order to match the interior!

The dozen or so proof copies with a brown-faced Rupert (below) are greatly sought-after and hysterically valuable! In fact, it might just be worth checking your attics! 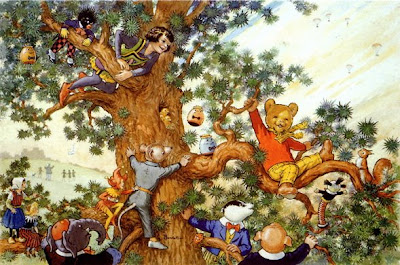 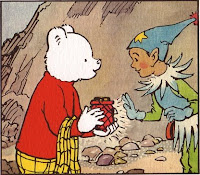 Another mystery, of course, was the way in which clothed animals and human beings - not to mention giants, wizards, dragons, unicorns, mermaids, goblins, pixies and living toys - cohabited in a fantastical universe.

Former Python (and Rupert-fan) Terry Jones once pointed out how Rupert encounters a talking cat, , in one story, and is utterly astonished by the fact as though he were not, himself a talking bear!

But then, in a way, Rupert isn’t really a bear he is a boy - a young child - you and I, the reader - wearing a bear-faced mask! 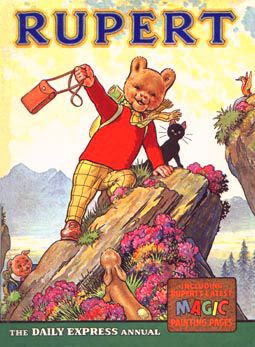 Equally curious was the fact that the human characters wear a wide range of costuming: medieval doublets and hose, Georgian knee-breeches and buckle shoes, Victorian skirts and bonnets, ‘twenties plus-fours and brogues and forties three-piece suits.

The last Rupert annual cover Alfred Bestall ever painted was that one on which Rupert turned white, but other artists carried on the work including Alex Cubie, John Harrold and Stuart Trotter who currently has care of the bear and who is, as can be seen from last year's 75th annual (below), a worthy inheritor of the Rupert legacy. 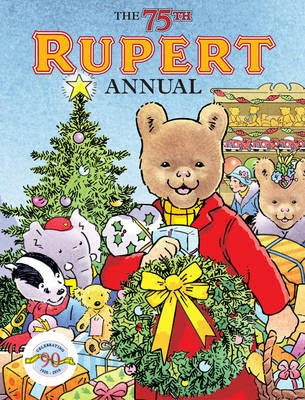 Thanks to everyone who keeps Rupert on the track of new adventures along with his chums - Bill Badger, Algy Pug, Podgy Pig, Willy Mouse, Pong Ping the Pekingese and Edward Trunk...

"Goodness," said Rupert, "it's been such fun,
Ninety years and I've just begun!"

To learn more about Rupert's world, his creators and the annuals, visit The Followers of Rupert

And if you're in the market for some old Rupert Annuals, visit The Official Classic Rupert Bear Mail Order Shop


A version of this post first appeared on Brian Sibley: his blog
at May 14, 2011 No comments: