Among my collection of signed books are volumes given to me by writers who were also friends along with others by writers, actors and celebrities whom I interviewed while broadcasting on the BBC's radio arts programmes or encountered while making my various radio documentary series; but, over the years, I have also bought signed copies of books from second-hand book shops, on-line book dealers and at auction.

Today's book is one such although I cannot now remember where I purchased this copy of Journey's End which recently surfaced in a box of books that hadn't been looked into for a number of years. What I certainly hadn't remembered was quite what a particular copy this is... 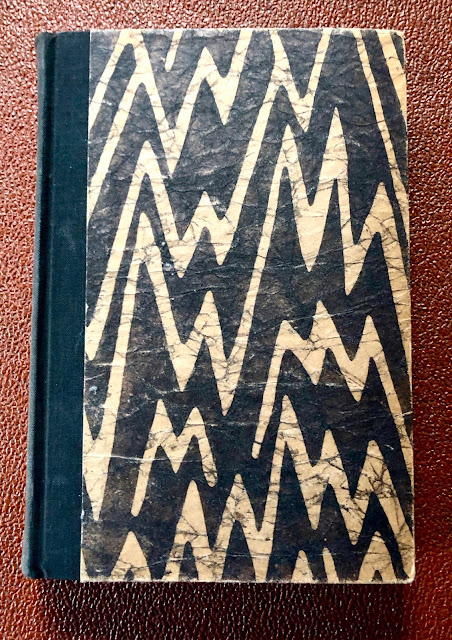 Journey's End is a noted play by English dramatist, R C Sherriff (Robert Cedric Sherriff, 1896-1975) set in the trenches near Saint-Quentin, Aisne, France, towards the end of the First World War.

The drama plays out in the officers' dugout of a British Army infantry company from 18 to 21 March 1918 and giving an intimate portrait of the lives of a group of soldiers during the last few days before the onset of the major German military offensive known as Operation Michael.

The Incorporated Stage Society on 9 and 10 December 1928 first staged the play, for two nights only. Directed by the then unknown James Whale (later director of many films including Frankenstein and The Bride of Frankenstein) and with George Zucco as Lieutenant Osborne and Maurice Evans as 2nd  Lieutenant Raleigh and the 21-year-old Laurence Olivier as Captain Stanhope.

The play moved to the West End first (with Colin Clive replacing Olivier) at the Savoy Theatre and then at The Prince of Wales where it had a two-year run. 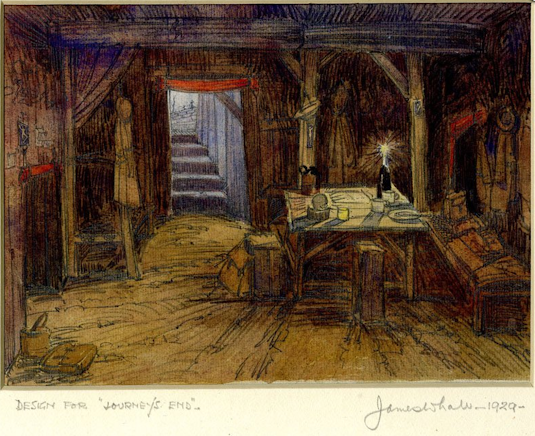 Included in The Best Plays of 1928–1929, the play quickly became internationally popular, with numerous productions and tours in English and other languages. 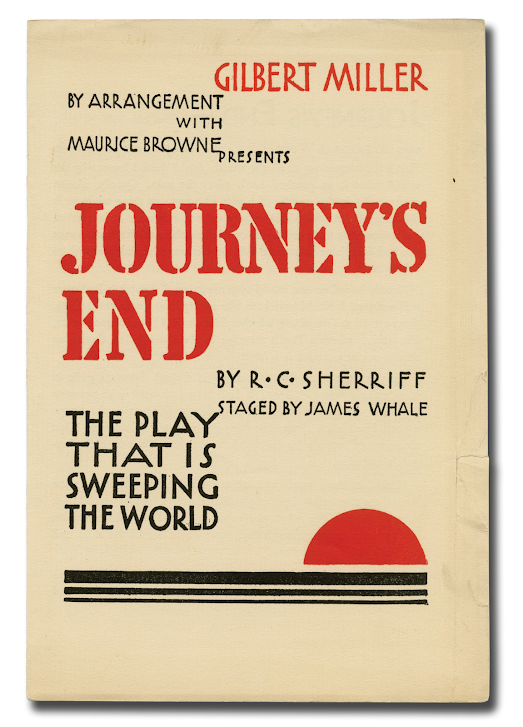 My copy of the play is the 1929 American edition from Bretano's Publishers and gives cast of that first New York run. 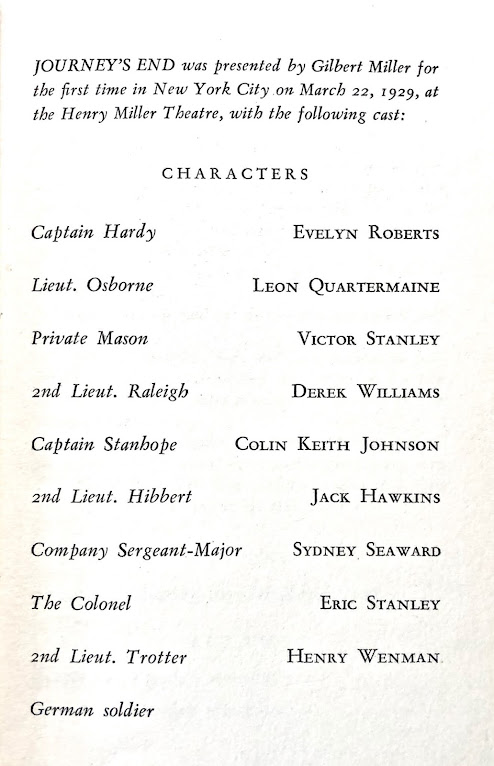 The play was once again directed by James Whale with Colin Keith-Johnston playing Stanhope and, in the role of Lieutenant Osborne – Leon Quartermaine.

What makes this copy of the play so particular, is that not only is it signed by Sherriff on the title-page, but is personally inscribed by the playwright (as 'Bob Sherriff') on the half-title to Leon Quartermaine... 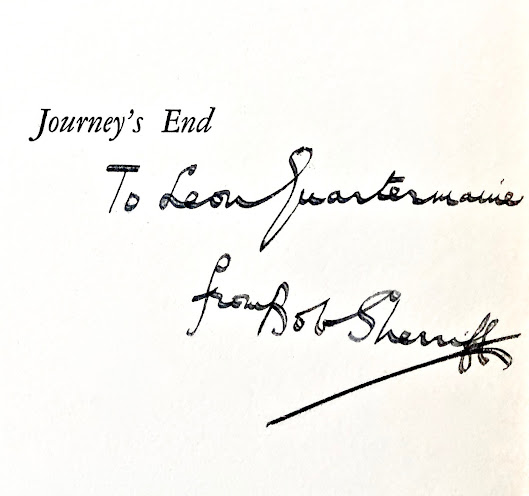 In addition to the signatures on the pages of the book itself there is ('loosely inserted', as booksellers put it) a later-purchased autograph of Leon Quartermaine, inscribed “with pleasure”... 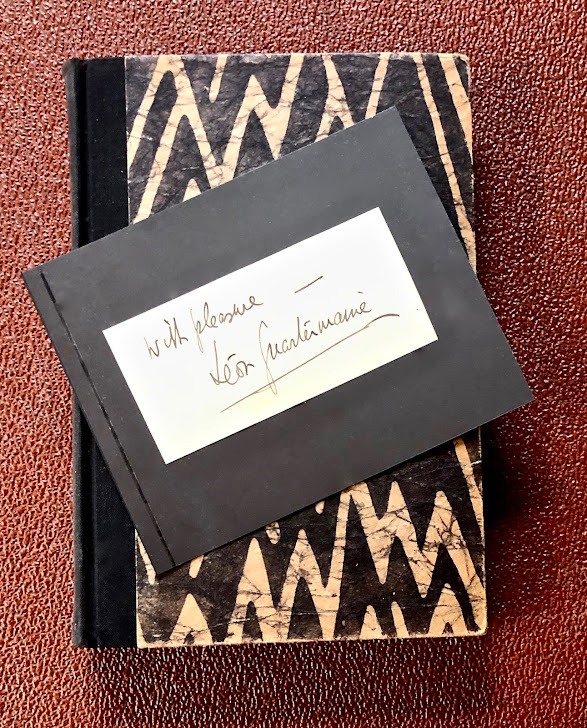 Leon Quartermaine (1876-1967) was born in Richmond, London on 24 September 1876 and educated at the Whitgift School in Croydon.

In 1921 Quartermaine appeared with Fay Compton in a West End revival of J M Barrie's play Quality Street and the following February Quartermaine and Compton were married, and remained so until their divorce in 1942. 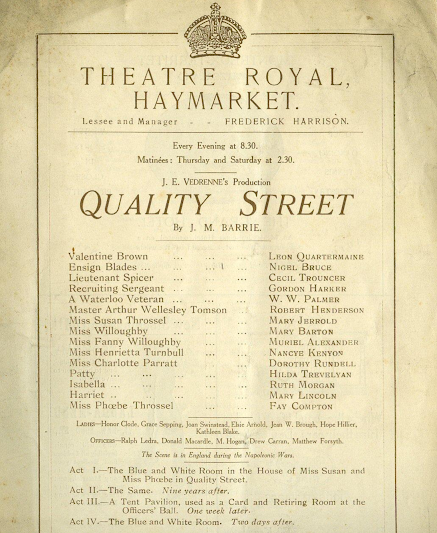 In addition to his performance as Lieutenant Osborne in the American premiere of Journey's End Quartermaine made numerous appearances on Broadway between 1903 and 1935, among them Laertes (Hamlet, 1904) and Malvolio (Twelfth Night, 1930).

Quartermaine appeared in several films during the ‘twenties and ‘thirties, including As You Like It (1936) in which he co-starred as Jacques to Laurence Olivier's Orlando.

After the Second World War, Quartermaine joined the Royal Shakespeare Theatre for the 1949-50 Stratford Festivals, in a company including John Gielgud, Peggy Ashcroft, Anthony Quayle and other leading Shakespearean actors, appearing in Macbeth, Measure for Measure and Much Ado About Nothing. In 1951 he played the Inquisitor in a BBC television adaptation of Shaw's Saint Joan.